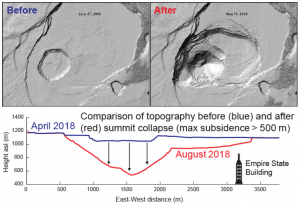 In 2018, the Hawaiʻi Supersite was affected by a crisis at Kīlauea volcano, where a lava flow destroyed over 700 homes. Starting in late May, the Kīlauea caldera began to rapidly subside as magma drained from here to feed the lava flow 40 km away.  In two months, parts of the ground had dropped by 400 meters, an amount never observed in a volcano eruption.

High-resolution InSAR monitoring with COSMO-SkyMed and TerraSAR X images granted through the Supersite provided unprecedented views of the collapse and have been critical for understanding how the subsidence was evolving over time.  These data, along with high-temporal-resolution GPS and seismic data, were analysed by the Hawaiian Volcano Observatory and the scientific community, generating information which has guided the response by Hawaiʻi County Civil Defense.

By early August, radar interferometry and GPS showed the end of the subsidence phase, indicating a reduced threat of new eruptive fissures opening. This information has been of crucial importance to the Hawaiʻi County Civil Defense, which is responsible for emergency response operations (including evacuations).

The Supersite data collected by international space agencies form an exceptional source of information  to understand the scientific aspects of this unprecedented eruptive event at Kīlauea, and will contribute to improve volcanic hazard assessment in similar volcanoes around the world.

Support to Emergency Management during the Bardabunga, Iceland, 2014 eruption

The eruption of the Bardabunga volcano started in August 2014, in the area covered by the Iceland Supersite. The worst scenario prompted for strong magma/water interaction, important explosive activity and emission of >10-km high volcanic ash cloud.

A Red alert was initially issued for commercial air flights. This immediately raised much concern in the international media, for fear of a possible doublet of the 2010 eruption effects of Eyjafjallajökull, which caused global losses of over one billion dollar.

The Supersite community analysed satellite and in situ data to monitor the evolution of the eruption and observed migration of magma from the Bardabunga caldera to a location outside of the ice cap, 40 km to the north.

The scientific products helped take many decisions during the emergency, eventually lowering the red alert to orange when the data showed that the eruption was not going to happen under the ice cap but well ouside of it, in Holuhraun.

To request information about these stories please send an email to media@geo.gsnl.org